"Nobody makes a greater mistake than he who did nothing because he could only do a little." - Edmund Burke

In that spirit, here’s my modest proposal. Back in the innocence of the 50’s, the Dark Ages of “duck & cover,” there was a bumper sticker that read, “Courtesy is Contagious.” Simplistic for sure but in this day of road rage and an Uzi for a turn signal, we could use a sh*tload of courtesy. There’s a real easy way to disarm folks-wave at ‘em. Yup, if you and I start wavin’ at people that cut us some slack while we’re casually careening down the 5 in the middle of the bumper mating season, euphemistically called rush hour, we might have the start of a movement, “The Wave.” Tell your friends, spread the word and just maybe we can get folks to realize that the guy in the car next to ‘em is a fellow human and not Attila the Hyundai. That’s the problem in a nutshell; we don’t know the guy in the other car. Back in the ‘60’s the Japanese did a study using rats, a very social animal. They put an ideal sized community of rats in a maze and rats being the social critters they are, would greet each other with a sniff, a snort and whatever else well adjusted rats do to acknowledge each other. They overcrowded the maze and the rats became sullen, no longer greeting each other but passing without a sniff, snort or other ratly social graces. They dubbed this “City Psychosis.” Change that maze to a freeway and you’ve got “Road Rage at Rush Hour.” Mine is a modest proposal but like Eleanor Roosevelt said, “It’s better to light a candle than curse the darkness.” So don’t be timid, roll down that window and that guy that let you in his a lane a big ol’ wave and let’s see how contagious it is.
Posted by Bob Merlin at 1:09 AM No comments:

Email ThisBlogThis!Share to TwitterShare to FacebookShare to Pinterest
Labels: Be Nice, Courtesy, Courtesy is Contagious, The Wave 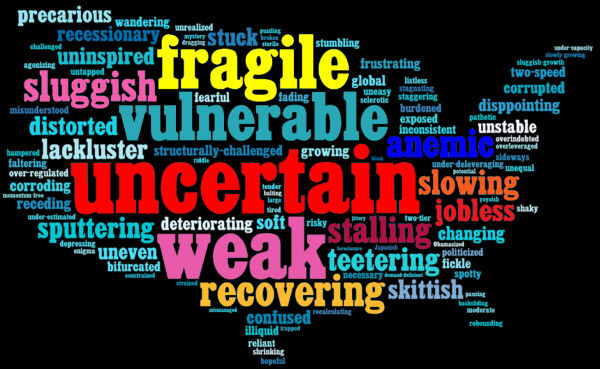 ﻿Adapted from Kaufman Economic Outlook
Posted by Bob Merlin at 1:51 PM No comments:

Here in Los Banos the traffic is horrid. The lights aren't synched very well so you spend a quarter of your time and gas at red lights. Add to this "The Cluless Commuter Corps" and things get real dicey. The "Corps" could help if only they would... 1- Turn Signals - You paid for them you know, now please use them! Let me know what youre up to. Im on Street Y waiting t o make a right onto Street X. Youre on street X coming toward me from the left. I wait patiently and wham! You make a right onto Street Y right in front of me. I could have made my right if youd used your turn signal. Give me a clue! You want to merge in front of me and guess what, use the signal and Ill let you! 2- The single digit Peace sign, a freeway tradition. This what you get when you dont give me a clue that you want to merge in front of me and just plow your way in. My rule is use it with caution as the recipient may have his own finger action; pulling the trigger on an Uzi. 3- The wave. I have consciously tried to use the wave to thank another driver when he cuts me some slack when Im attempting some a lane change or other daring move. If your window is up, roll it down and wave, youll feel good. 4- In this age of GPS, Yahoo maps, and Thomas Guides, why do you wait until your off ramp is 500 feet away and execute a Kamikaze 5 lane change? Its real easy, start movin right a mile before your off ramp. That way youll be in the proper lane and were spared your dashing bravado and the freeways flows right along. 5- The SIPs - Self Important Pr**ks. Theres a line of cars inching forward, patiently waiting to exit the freeway at an off-ramp. Youre much too important for this nonsense so you drive by all of us and force your way in at the head of this line at the last possible moment. Not only is this obnoxious, youll also cross that solid white line at the start of the off-ramp in doing so. Wheres a CHPie when you need one? 6- Making a left? Get out in the intersection! Its legal and more cars can make the turn. You in the cars behind, close the gap! I can see keeping a gap so that you wont hit the car in front if you're rear ended but when youve got 5 cars behind you, be daring and pull up so you're a couple of feet behind the car in front. Burbank has a great idea. When the left turn arrow goes out theres no red arrow, you're still free to make a left when its safe! 7- Want to go on a leisurely put? Get to the right! If cars start passing you on the right, you need to speed up or move right. If you cant go 50 on the freeway, get off. Either you or your car is too slow; neither of you belong on the freeway. Thanks and now get out of my way!
Posted by Bob Merlin at 8:51 PM No comments:

Inteligent Design, Get a Grip!

It's Bullsh!t. How many times have you been doing some tricky little task and thought, "Gee, a third hand would be cool!" The bottom line is that if we were intelligently designed we would have three hands, at least! Just think how much more fun sex would be with three or four hands.
Posted by Bob Merlin at 11:15 AM No comments:

In August 2006 I drove from Baltimore, Maryland back home to L.A. It was a blast and I'm happy to say that America is as friendly as ever. I met some really great folks.Thanks for a great journey! The sad thing is that we've become way too homogenized. We've become McMerica. I passed through Sedona, Arizona and was so impressed I doubled back for more, humor that is. Sedona is a traffic infested tourist trap that uses those vortexes to suck as much cash from the believers as possible. It's modern

snake oil huckstering personified. Don't get me wrong, I did have an epiphany, just not the one you'd expect. I'm not sure if it happened under the "Turquoise Arches" or the "Sacred Cellular Spire." Mine was from the beautiful countryside and it's relation to the old daily Krazy Kat cartoon strip of George Herriman that ran from

1916-1944. It was originally in the bottom margin of Herriman's the "Dingbat Family" comic strip. It was set in Coconino County, Arizona where Sedona is located. In his strip it was Kokonino Kounty and was populated by Krazy, Ignatz the mouse and Officer Pup as the main protagonists. The background drawings of the strip were stylized versions of the plants, mesas, buttes, and rock formations found 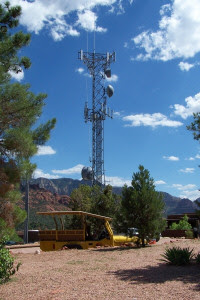 near Sedona. As I drove through the Coconino National Forest to Sedona, I instantly saw where his inspiration came from. That was my revelation. As for

Sedona, they really did pave paradise. The last photo is 10 or so miles from Sedona and is below the town of Jerome, an old copper mining town nestled in the hills above this plant. I couldn't find out what is was and the locals I asked didn't know either or weren't talking. Hmmm...

Peace in the World... 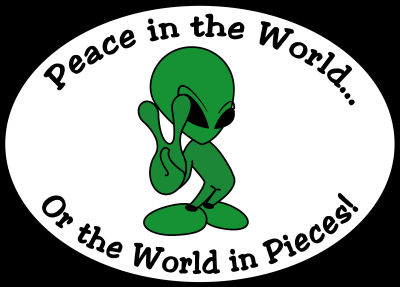 My Anti War Sign for Atomageddon
Posted by Bob Merlin at 5:36 PM No comments: 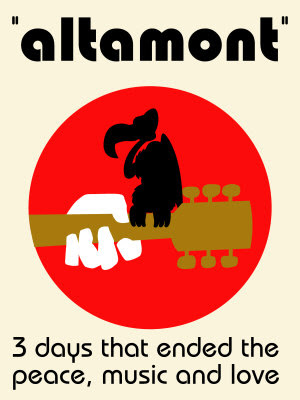 This a digital version of a graphic I did in 1969.
More of my stuff every now and then. In the
meantime, click on over to my website,
The Airbrush Museum
Posted by Bob Merlin at 10:47 AM No comments:

It's about the troops not the war. 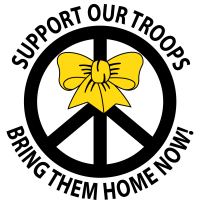 This country needs to do much more for our returning troops. I abhor the war and what is being done to the men that have been there. Phil Ochs said, "It's always the old who lead us to the war, it's always the young who die." Bush, Cheney and Co. should be ashamed of what they have caused. Cheney's "Quagmire" video The Untold Story of the Cheney 'Quagmire' Video
Posted by Bob Merlin at 10:39 AM No comments: 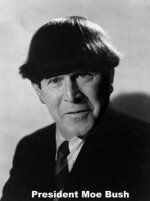 Dignity! That’s the word that that George Bush (aka "The Smirking Chimp" thinks is ambiguous in the Geneva Accords. Well George, here’s a simple acid test. If you wouldn’t let someone do it to you in front of your closest friends and family, you can’t do it to prisoners of war. Pretty simple, huh?

While we're at it, why do we have female guards in with the male prisoners in Iraq? Given that we are guests, it seems to me that it's not very culturally sensitive to give women power over men in an Isalamic country. I don't agree with the Muslim attitude towards females but when in Rome...
Posted by Bob Merlin at 10:37 AM No comments:

Bob Merlin
I'm upbeat and offbeat, I see things from a very different point of view. I blame this warpage on my teens. While most kids my age were listening to Elvis, I was listening to Stan Freeburg, Mickey Katz(a borscht belt comic), Lenny Bruce and of course, his royal hipness, Lord Buckley. Buckley once lived across from a dump filled with old mattresses. Rather than PM(piss & moan)about it he dubbed it his mattress farm. He made the ordinary surreal. He was an inspiration to Robin Williams, Jonathan Winters, and many, many others. Mine also. He single handedly paved the way for all the comedians of today. He kept court and everyone around was a prince, count, or some other royal title. He died in 1960 My current source of warpage is the Rev. Billy C. Wirtz. Anybody that can get Elvis, Barney, and "Its a Small World" into one song is OK in my book. His best CD is called Pianist Envy. Between the tracks is a running tale about Roberta, wife number 3. Find it, buy it and get some super glue; cause you'll laugh your ass off. I’ve always done crosswords and in addition to keeping the “little gray cells” active they force you to look for alternative meanings and perspectives.